This excerpt from John Thurman's 'Pioneering Principles' describes an alternative to the figure of eight lashing for making tripods. I have come across this lashing before, it was in use in the late 90s in troops around Johannesburg. So, the Sailmaker's lashing: 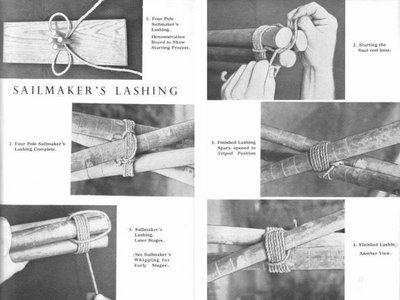 Anyone concerned with rope work knows that the Sailmaker’s Whipping is a very good whipping for the end of a rope. It is simple to do, is a solid and secure job, and it looks attractive. Now, if it can be used for a three-stranded rope, why should it not be used for lashing together three spars? Through that process of reasoning we have been able to create the Sailmaker’s Lashing.
I am not going to describe it in detail because the Sailmaker’s Lashing is simply the whipping done on the end of three spars instead of the end of a three-stranded rope; there is no difference in method or result except perhaps to say that if you are putting on the lashing in order to make a tripod it must not be put on as tightly as would be done for a whipping. This is the same effect as in a sheer lashing: the tightening process occurs when you open out the spars and if you have made it too tight the only answer to the problem is to take it off and start again.
A further set of photographs shows you the Sailmaker’s Whipping as used on a four-stranded rope, and the same principle can be used for lashing four poles together, You may not want to do this very often, but it is as well to know that it can be done.


This item is reproduced here in compliance with the Creative Commons license held on the book.

Our troop only uses Sailmaker's lashings. We don't teach the figure of eight lashing, and we find the sailmaker's tends to be stronger, and easier to make.

But then again, we are a special troop (www.9thirene.co.za).

Thanks for giving idea on Sail maker’s Whipping

Shop with Ropes and Poles